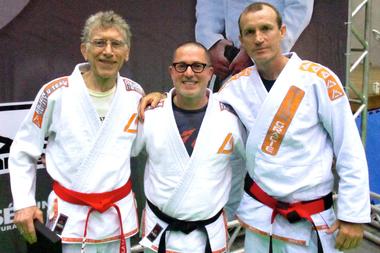 Brady, the instructor at the Rilion Gracie Association of Green Bay, holds the rank of Gracie Jiu Jitsu Black Belt, First Degree. He attended years of classes with the excellent Professors and students at the Rilion Gracie Academy in Miami. Brady also received hundreds of hours of personal instruction from Master Rilion himself, and was honored to have been promoted by him sixteen times. Although Brady had trained striking martial arts for most of his life, and Jiu Jitsu for years, he had never had the opportunity to learn from someone with the teaching ability, knowledge, and experience of Master Rilion. Learning the philosophy that accompanies the physical practice of Gracie Jiu Jitsu was the missing element of Brady's life long study of the martial arts. Master Rilion gave him confidence not only in his ability to defend himself, but also in the way he lived his life. His goal in moving to Green Bay, and in starting  Rilion Gracie Green Bay, is to share what he's learned so that others can experience these positive life changes as well.

Rilion is the youngest son of the GRAND MASTER CARLOS GRACIE Sr. (the founder of Gracie Brazilian Jiu Jitsu and the creator of MMA ). He has been involved in his father’s tradition since he was born. He has grown up in the world of mats, healthy living, improved life skills and philosophic concepts of Gracie Jiu-Jitsu. Rilion is proud to have had his father Carlos Sr. and his brother Rolls (the forefather of modern Jiu Jitsu) as his mentors and professors.

Before Jiu-Jitsu became a sport, it was a martial art based on the principals of respect, hierarchy, discipline, self-control, self-confidence, patience and many others. The objective is rendering the opponent into submission.

Rilion fought competitively for 15 years in both Jiu Jitsu and free style matches. In his competitive career as a Black Belt he was never submitted, neither in competition nor in sparring sessions.

He is recognized in the Jiu Jitsu world for his mastery of the art and has become known for being “100% technical”.

In the early 1980’s besides teaching at the Gracie Ipanema academy, he was a founding member of the Gracie JJ School in the Barra da Tijuca neighborhood of Rio de Janeiro, along with his older brothers Crolin and Carlos Jr. In 1988, he was one of the instructors at the first Gracie Jiu Jitsu Seminar in the United States hosted by the actor and Martial Arts enthusiast Chuck Norris.

In the early 1990’s, Rilion decided to move to Santa Catarina (a state in south Brazil) to spread his family’s legacy, and establish the Rilion Gracie Academy in Florianopolis. Through his dedication and expertise, his academy grew into what today is one of the strongest Jiu jitsu academies of South Brazil.

Rilion has over 25 years teaching both Jiu Jitsu and MMA, and has been a professor and coach to many international champions including among them many representatives of the Gracie family (including Renzo, Ralf, Kyra, Rolles, Igor, Gregor, Daniel and Roger).

Rilion believes that the most important thing in life is the search for true essence, spiritual development to overcome life’s difficulties and to contribute to a better world for all of us.

There is a no doubt that Jiu-Jitsu when practiced and taught with it’s true principles, bring about physical, mental and spiritual benefits.

Today Rilion is devoted to his students and family, teaching the techniques, philosophy, and traditions passed down to his family by his father Master Carlos Gracie Sr.

Rilion now splits his time teaching at his academies in Miami and Houston.